If I close my eyes and think of cheese, I picture the old days of sitting down with my friends in front of a wonderful selection of cheese. There’d be crackers, olives and often fresh fruit. We’d be drinking wine, of course, and talking about things both silly and serious. Or even better, I remember touring France, sampling the local Camembert, Emmental or Reblochon. Before I stopped eating animal-based cheeses, I remember loving that Spanish cheese, Manchego. Ah, cheese, glorious cheese.

When I tell people I am now vegan, they inevitably ask me what I eat for protein and then when I tell them I don’t eat dairy, immediately say, “Oh, I could never give up cheese.” Their look of horror at the idea of giving up cheese makes me smile. Admittedly, it wasn’t easy.

I had a compelling reason to try veganism: my cholesterol was becoming dangerously high. For a couple years, I tried to restrict my diet and do more exercise but it didn’t work. The only answer was going to be a pill. For the rest  of my life. So two weeks before my annual checkup, I stopped all meat, dairy, anything that didn’t come from a plant. My cholesterol dropped so much in that short period, that both my doctor and I were shocked. If I kept it up, she said, food would be my medicine. She didn’t say it quite that poetically but I’ve not taken a pill of any type since. Not even vitamins.

But what about cheese?? Until recently there was no real replacement, none that I’d serve my friends, that is. But, I have to admit, if it weren’t for that animal cruelty issue, I would have given in.

For the first couple years, I didn’t think about cheese. I was so busy, yes, dealing with that protein question, coming up with new meal choices every day, learning about quinoa and the world of whole grains, trying new spices, discovering wondrous ways to eat fruit and veggies (juices and smoothies) that I forgot all about cheese. My vegan cookbook and recipe collection tripled, if not quadrupled.

Then came the day we were going to make our own pizza. How could one have pizza without cheese? So I bought some of that stringy Daiya cheese. The cheese melted which is really all I can say about it other than it looked like cheese. Was that the best vegan cheese out there? I started looking. At Whole Foods I found the brands, Follow Your Heart and Go, Veggie! I give these companies credit for coming up with something cheesesque … but I wouldn’t buy them again. 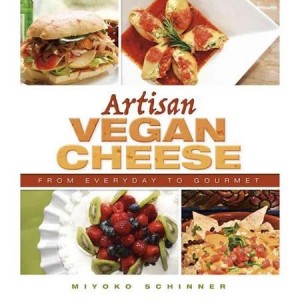 Finally on our way to San Francisco (and up north to wine country), we took a side trip to Berkeley to see the university (alma mater of my fictitious character, Sydney) and to stop at a local vegan grocery store. I read they sold some good cheese. Yeh, right. But as it turned out, they did! The scrumptious cheeses from Miyoko’s Kitchen were rich, creamy, handcrafted, aged vegan cheese. I was in heaven. Check out their website or look them up on Facebook. Miyoko Schinner already has a book out, too: Artisan Vegan Cheese: From Everyday to Gourmet.

Next I tried my favorite P-town market, the 141 Bradford Natural Market. Did they have anything good? Their first attempt at “good” was a spectacular vegan cheese so expensive, they didn’t reorder it. In general, vegan cheese seems more expensive but only because the U.S. dairy industry benefits from millions of dollars in government subsidies – from land to corn and soy for animal feed. Then they brought in the brand Fauxmaggio, made right here in Massachusetts. So far I have tried three of their spreadable cheeses: smoked paprika, green onion and chives and the garlic herb. I loved each one. 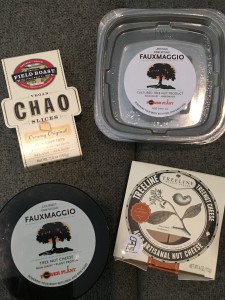 The new wave of companies so far seem to be focusing on soft cheese, using traditional techniques such as cultures, fermentation and aging. Most are created with organic nuts and plant-based enzymes, spices and herbs. These cheeses are even good for us! The cashew-based cheeses, for instance, are high in their mineral content (copper, manganese, magnesium, phosphorus), contain vitamin K and – ta da – help LOWER cholesterol. But best of all, they are delicious. Spread them on anything.

I recently found an incredible sliced-cheese variety made by the award-winning company, FIELD ROAST. They’re called VEGAN CHAO SLICES. I love the “Creamy Original.” They’re made with coconut oil and fermented chau tofu (from Greece). Sometimes I just take a slice (or two) from the fridge and nibble on it. It’s that good.

But Miyoko Schinner gives me the best hope. Below is a photo from her website, which she gave me permission to print. This is the new table of my dreams.

I am so excited to once again be able to sit down and indulge. I know as time goes on, there will be even more and more good choices. Pull up a chair. Join me.