Please think about being part of the solution, rather than contributing to the problem.

I’m sure none of you missed the recent horrors – on TV, if you were lucky – of superstorms Harvey, Jose, Irma or Maria. Can you imagine dealing with the loss of all your worldly processions, or your home, or where you used to go to work or school? Imagine living in Puerto Rico today.

Then there were the horrific wildfires out in California. For many people the fire was as close as the house next door. We know now that the intensity of the summer heat waves, the floods, droughts and wild fires are all linked to climate change and are only going to get worse.

To be clear, no one event (hurricane, typhoon, drought) is of itself a product of climate change, but the intensity and record-breaking nature is directly linked to climate change and, I repeat, it’s only going to get worse.

So how are climate change and eating beef related? Primarily, because these animals produce an enormous amount of gas digesting their food. These are the greenhouse gasses (mostly methane and nitrous oxide) that are causing so much damage to our atmosphere. And yes, farmed cattle produce more greenhouse gasses than all the cars, ships and planes combined.

According to Science ABC, “a single cow, on average, releases 70 to 120 kgs of methane per year.” And that’s – pardon me – the farts of just ONE cow! “Worldwide there are approximately 1.5 billion cows and bulls, each emitting that much methane … methane is 23 times more harmful than carbon dioxide.”

Secondarily, because we we are using enormous amounts of valuable land all over the world to graze and feed animals. 260 million acres of forests have been cleared in the US alone to provide crop acreage.

“Beef. It’s What for dinner.” Remember that marketing slogan from 1992? It was highly affective and beef sales (despite catastrophic health repercussions) continue to rise around the world. China, the most populous nation on Earth (1.4 billion people), is opting more and more for beef. India is poised to edge out China in population (1.3 billion people). India was once thought to be predominantly vegetarian. Now 71 percent of Indians identify as non-vegetarian. As for India’s “sacred cow…” India is now the world’s largest producer of milk and a top exporter of beef ( it also ranks third in egg production and is the sixth largest producer of chicken on earth). There were zero McDonald’s in India in 1995. Now there are 300. Same for KFC: 30 in 1995, 318 today.

So, what can we do? How can we make a difference? The single most powerful change each of us can make is to CHANGE OUR DIET.

Ray Monk, a professor of philosophy in the UK, said he finally went vegan not for health or animal cruelty reasons but for the sake of the planet.

But if that’s too drastic, opt for “Meatless Mondays,” go to the salad bar more often, look online for dishes that would normally “require” meat and see all the cool replacements. Make a commitment to eat meat, pork, poultry or dairy only once a day. Eat more fruit and vegetables. Whatever works for you and your family. Or make only one single change – “substitute beans for beef” –  says James Hamlin, to have THE most environmental impact:

Click here to read his article in The Atlantic.

It’s easy to feel powerless nowadays, but the fact is we CAN make a difference. Look at the choices for different non-dairy milk products in the market place today: soy, almond, cashew, coconut, rice, oat, hemp, flax. Lots of people started asking for alternatives and the market responded.

Helen Keller was one of my childhood heroes. I share the vision of saving our planet. I hope you’ll chose to make a difference, too. 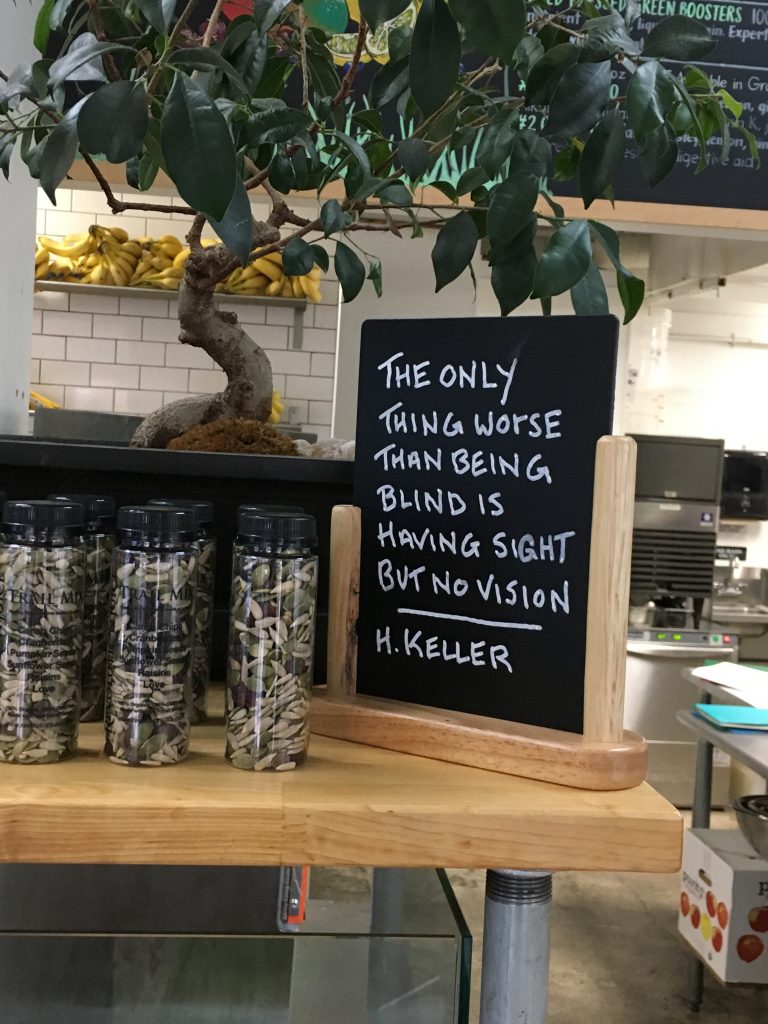